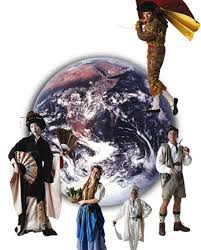 Cool Facts! This region was nicknamed "Southeast Asia" after World War II & became popular. It replaced the phrase "Further India," "the East Indies," and "Indo-China." Included in SE Asia is the Malay Peninsula, the Indochina Peninsula, and the Philippine and Indonesian archipelagos (did you know???? An archipelago is a group of islands). The Indonesian Archipelagos are made up of more than 17,000 islands! It is the largest archipelago in the world!

(a) Loyalty to the family was an essential part of the African social fabric.

(b) In a consensus form of government, the good of the community was stressed over that of the individual.

(c) Understanding one's role in a community was an important apect of education in some societies.

(d) Traditional beliefs played a significant role in the daily life of many Africans.

(a) Racism was the main cause of slavery.

(b) The outlawing of slavery in the British Empire helped end the slave trade.